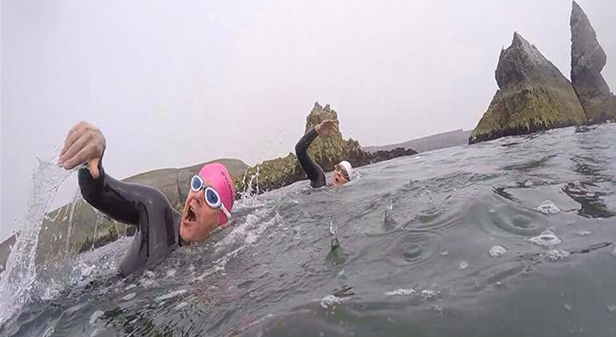 Welsh man dedicates #50Before50 campaign to father who died of cancer

In the memory of his father who died of cancer, Don Wilkes pledged to do 50 things before he turns 50, the proceeds of which would go to a cancer charity. Was Don able to complete the task before time?

The sun shone bright above him when he began to perspire. Amidst the noise from other athletes’ footsteps, the only thing Don could hear was his breath. He had run almost 20km, but the goal still seemed too far.

“It was the hardest of all the tasks, I must say,” says Don Wilkes. “70.3-miles is a lot, and it was very strenuous because you had to cover the entire distance at once – but I’m happy I did it.”

The #50Before50 challenge was an initiative Don undertook after the demise of his father Dan Wilkes in late 2015. The objective was to raise funds for the George Thomas Hospice Centre in Cardiff, which had been instrumental in supporting his father through his last days.

“He was diagnosed with cancer in September,” says Don. “When he came out of the hospital, the doctors and specialists came around and talked us through his illness and its stages. They provided us all the support we needed and that’s why I felt I owe it to them.” His father eventually passed away in November, aged 90.

Surprisingly, Dan Wilkes was not Don’s biological father: he was 11 years old when his mother remarried. But Don nevertheless identifies himself as Dan’s son, and he shared a close relationship with him. “He was a lovely father and he has been an incredible grandfather to my children too.”

Born in South Wales and raised in Cardiff, Don, a pharmacist, had never imagined of doing something like this before. He got the idea from a friend in Canada, who had also taken up the #50Before50 challenge. Since she ended up not completing her challenge, Don’s doubts on whether he would make it in time were natural.

“I became determined ever since and the only thing I knew was I had to do it,” says Don. “I told my father too, [by his] death bed, that I was taking up such a challenge and he was pleased to know that I was raising funds for the hospice. So the activity meant more than a challenge to me.”

From activities like running across all parks in Wales to baking a loaf of bread, his list of 50 things was a mix of simple and tough activities. His wife had planned it all for him during the course of a year and his children – and even some members of his extended family – joined him for some of the activities.

“My children climbed the castle with me, went kayaking, participated in the Ironman and ran the marathons,” says Don. “A lot of my family and friends were involved in the ‘penny drive’, putting all the pennies on the road together, which took us a full day. They have all been extremely supportive.”

But it wasn’t easy for him to do it all. Where many take up the challenge, Don’s fear was that of not completing the challenge before he turned 50.

“My biggest fear was that of failure,” Don recalls. “There were times when I felt like I couldn’t continue. Especially activities like the Ironman run and the penny drive where I was out in the sun for days and sometimes it did feel like there was no end. But I couldn’t look back and let it go, and I guess that’s what helped me achieve it.”

Surprisingly, Don had not made himself pot noodles before entering the challenge. “I wasn’t too fond of it in the first place so I never tried it but then my wife told me that this journey is about me doing things I have never done and this was definitely a part of it.”

The closest activity to Don’s heart was that of giving a speech at his daughter’s wedding. Karis, his daughter, was going to get married and she knew that he would be reluctant to speak anything. That’s why she added it as a task in his bucket list.

“I usually don’t like to give emotional speeches but this time I had to, thanks to my daughter,” says Don. “Though difficult for me, I felt really good that I did it and made the event memorable for both myself and my family.”

Having completed the challenge just in time for his 50th birthday, Don hosted a big celebration with his family and friends.

“I feel pleased with what I have achieved,” he says. “I have a lot of lovely memories to cherish now, and a real sense of achievement that I finally did it for those who needed it the most.”

Since the challenge ended, Don has been taking some rest and giving a few talks on his endeavour. “It’s my wife’s 50th birthday this year and we have decided to take it easy,” he laughs. “We have planned a few vacations around, to unwind from the events of last year and give ourselves a much needed break.”

Your email address will not be published. Required fields are marked *